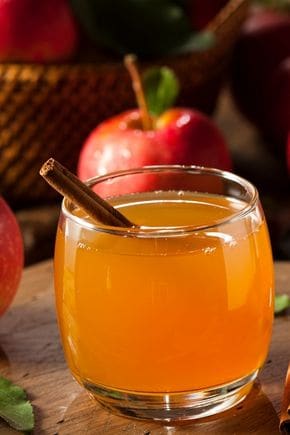 Hot apple cider is one of the most popular drinks in the country, and it has a deeper history than you might expect. From overseas to our modern American homes, this beverage has come a long way and evolved over the centuries. So, if you’re going to enjoy apple cider in its entirety, it can help to know exactly where it came from and how we’ve cultivated it into a fall staple. Here’s the history of apple cider and what has made it fall’s favorite drink for millennia.

What Is Apple Cider?

Before we can delve into the history behind apple cider beverages, it helps to have a clear understanding of what it is. The term cider often describes an alcoholic beverage that has undergone fermentation. However, in our neck of the woods, it’s simply used to refer to a form of unfiltered and unfermented juice. In this case, apple cider is apple juice that still contains bits of apple flesh, and, therefore, is much cloudier in appearance. With lower amounts of added sugar, cider has a tart taste that’s more reminiscent of natural apple blends.

While you can drink mulled apple cider as-is, it’s common for cideries to experiment with their own formula by adding select spices. They can even achieve different tastes and sweetness levels by experimenting with the apple types and blends they use during extraction. In a nutshell, apple cider is a drink that evokes all the tastes and atmosphere of fall in a single mug.

Apple cider is so popular in America today that we tend to forget apples weren’t native to the Americas. As shocking as it is to think about, every apple tree in North America had to come here from overseas—aside from the inedible crabapples. The very first apple trees grew near the Nile River in ancient Egypt, where they were commonly used for food. For over a thousand years, the first cider beverages spread their way across Europe. Due to limited preservation methods, this beverage was thick, darkly colored, and alcoholic.

It’s important to mention that compared to other alcoholic drinks at the time, cider had the lowest alcohol concentration. It was this trait that made it a go-to drink for families since water supplies were usually unsanitary and contained large quantities of harmful bacteria. Due to the low alcohol level, cider fought off these germs and was generally much safer to consume.

By the time the early colonists made their way to the new world, both apples and their cider were beloved by Britons. As such, it was only natural that they would bring some apples along with them. Planting their seeds was an iconic first step in the growth of the cider industry, and one that completely changed the diets of every native to the land. With only the bitter and hard crabapples growing nearby, the large and sweet fruits were a welcome change.

Cider was still the preferred drink of the time since water sources contained countless numbers of harmful agents. Fortunately, apple trees yielded fruit quickly, making them a very reliable source of both food and drink in an unforgiving landscape. Eventually, the colonists learned that they could graft branches from some apple trees on to others, creating some of the tasty variants we eat today.

The History of Nonalcoholic Cider

As we’ve discussed, all early forms of cider were alcoholic due to the natural fermentation process. Settlers and older civilizations simply didn’t have the means to preserve the drink, leading to the creation of alcohol within its formula.

Today, cider doesn’t have to be alcoholic. With the right processes, it’s possible to stunt the fermentation process. The well-known figure Johnny Appleseed even planted his own orchards of apples intended for cider makers to produce a less alcoholic blend for kids.

Down Spike in Popularity

Though apple cider was a staple in many cultures all over the world, there was a time when it experienced a down spike in overall popularity. This shift started when beer became the primary alcoholic beverage of choice in the early 20th century. The stronger drink became more popular, and the naturally less alcoholic cider took a back seat.

In the 1920’s, the US government outlawed alcoholic drinks entirely. Those who drank anyway preferred the higher concentrated liquors and beer. Still, cideries fought to maintain their customer base by manufacturing nonalcoholic brews. Fortunately, with prohibition eventually coming to an end and individuals looking for something different to try, cider quickly rose in popularity over the last several decades.

We can’t fully discuss the history of apple cider without giving some attention to where we are today. Modern apple cider is an iconic addition to the celebration of the fall season. Apples are ready to harvest at this time of year, and brewing it down into cider is a great way to use up produce and evoke a timeless feeling of warmth. Many ciders are on the sweeter end of things, with plenty of spices and sugars to better fit the modern palette. Additionally, our modern preservation processes and brewing procedures allows us to produce nonalcoholic variants for children to safely consume.

We also have many more apple species than before. Whether you prefer the sweeter types like honeycrisp, fuji, and gala, or the tart species like granny smith, Braeburn, and pink lady, there’s a mixture out there for you. In switching up their formulas and processes, modern cideries can make more flavorful variants every single year. This just goes to show that the history of fall’s favorite drink is a rich one that shows no signs of ending any time soon.

It’s no secret that apple cider has one of the most iconic tastes in history, and Mountain Cider seeks to preserve and improve upon that rich heritage. Our specially blended spiced apple cider concentrate uses only the highest quality apples and evaporation processes. This leaves us with a thick concentrate you can mix into mug upon mug of classic cider goodness. Our product stays fresh for longer so that you never need to worry about it going bad or running out. Give us a call if you’re planning to stock up for the season!